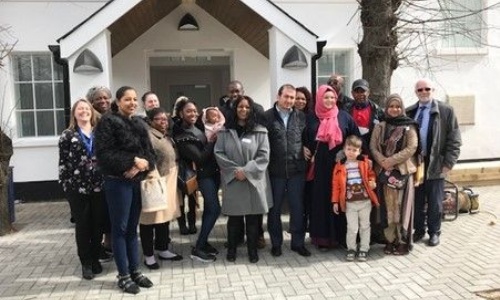 East London Independent School was very proud to welcome a large group of their parents and carers to visit the brand new Stratford Marsh school site just before the Easter holiday.

After a welcome coffee and introduction at the existing Custom House site, the parents and carers were transported over to the new school building, where they were given small group tours around the site by Thomas Keaney (CEO and Schools’ Proprietor), Gareth Jones (Co-Head Teacher) and Hollie Riley (Stakeholder Engagement Manager). They saw all of the new classrooms and outside spaces as well as some in depth learning about the highly specialist ASC environment that the new school hosts. During the tours, parents and carers were able to experience the environment in its very nearly finished state, with only the last few areas for the builders to complete.

In addition, many of the group signed up to join the newly formed Parent Council at ELIS. This group, the first of its kind at ELIS, will provide much needed support for parents and carers as well as being an integral part of how ELIS will run in the future. The Parent Council will be instrumental in planning events, interviewing staff and improving the school resources and curriculum and will also provide new parents with a much-needed support network, just as the Student Council does for new pupils. The first Parent Council meeting is taking place in Stratford Marsh on Thursday 19 April. If you are a parent or carer of an ELIS pupil and would like to attend, please contact the school directly or Hollie Riley at Central Services.